Pasta and beans with Mussels (Pasta con fagioli e cozze) is a typical summer Neapolitan recipe. Until the 19th century in Naples, this dish was called in the Neapolitan slang "Madames four soldi" because of their low price. There are as usual for Italian recipe different regional versions. In Puglia the most famous version is with the Taranto mussel. A Sicilian version from Messina: Spaghetti with Teneruni (the sprouts of zucchini plants) and mussels are famous here. The Sicilian king Ferdinand of Bourbon, known as a gourmet personally fished for the mussels in the waters of Posillipo.  With him the famous dish "Peppered mussels" (Impepata di Cozze) was born which later, precisely due to the low price of the mussels became so popular, and creating the profession of the Mussels peddler (o' Cuzzecare) - one of the oldest Neapolitan professions.

Assuming you are using dried beans for this recipe. Then soak them the night before with salt. The next day, cook them and once cooked, throw away the water and then add more and continue cooking them to make them creamy. You can also use tinned beans.

The next step is the preparation of the mussels. Clean them with a small knife. Remove all the hard outer parts; rinse them and then put them in a pot with a drizzle of oil. Cook them over medium heat: shake them every now and then. Once they are all open, remove them and set aside.  Filter the water with a cloth and set the liquid aside. Once this is done, take a pan: pass a drizzle of oil, a clove of garlic and celery cut into very fine pieces. When the celery has softened, remove the garlic and add the tomato (squashed. Now add the boiled beans.Cook for 15 minutes then add the mussels with their filtered water and a little chopped parsley, salt and turn off the heat. Cook the pasta in abundant salted water, drain it halfway through cooking and finish cooking in the beans. If needed, add more water. Serve in a bowl, sprinkled with chopped fresh parsley and pepper or a bit of olive oil. Buon appetito! 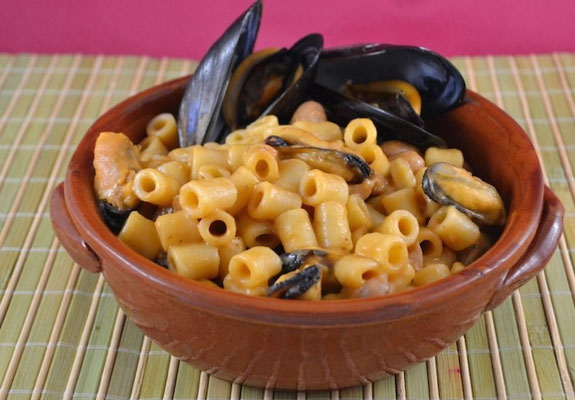 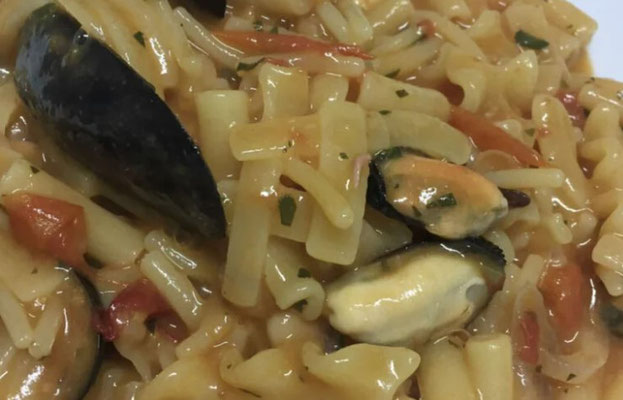 The Michelin Star version by Chef Antonino Cannavacciuolo of pasta e fagioli con cozze. His secret to the ultimate creamy consistency? Once the beans have been cooked; take the beans out with a little of the cooking water and mix it into a creamy consistency. This cream becomes the core of the dish.