Cipriani launches another hospitality service at Palazzo Franchetti in Venice

Another Cipriani-branded club in Venice. After Harry's bar and Harry's Dolci, the name of the famous Venetian restaurant will be linked to the Veneto Institute of Sciences, Letters and Arts and to its headquarters in Palazzo Franchetti. Here the Cipriani Eventi srl company will take care of the setting up of the restaurant, at the service of the visitors of the palace on the Grand Canal. After years of management of the café by Rosa Salva, another Venetian brand, there will also be a change in the type of offer. The signing of the contract for the "transfer of use of the ground floor" of Palazzo Franchetti between Vic, the company of the Institute that manages the building, and Cipriani Eventi srl took place last Friday. Yesterday it was Arrigo Cipriani himself who announced it, in a satisfied note, in which he announced the opening of a "catering service that also enhances all the products of the lagoon ecosystem". For years, the cafeteria of Palazzo Franchetti had been frequented by those who attended conferences, but especially during the lunch break by those who worked in the surrounding area. A clientele of aficionados on whom Rosa Salva's service was calibrated. Then, over the years, many offices in the area have closed. The Cafeteria, open daily to the public, is on the ground floor, divided from the garden by a big window that gives the idea of a winter garden. The spacious, airy room, with neo-Gothic ceiling arches supported by four columns, is lit by a big Murano chandelier designed by the master glassmaker Fabio Fornasier for the exhibition "Vetri nel mondo Oggi", held at the Palazzo Franchetti in 2004. 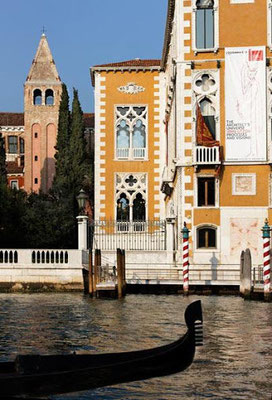 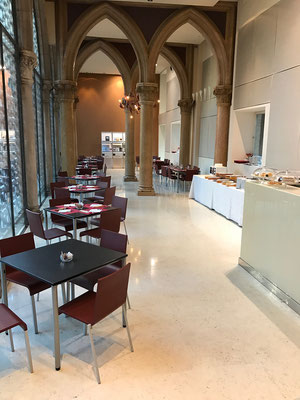 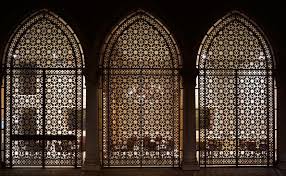