Valentino broadcasted last week on its social network a Del Naja film, 'Making of the Haute Couture Collection,' produced and edited for the first time by artificial intelligence. The Valentino couture show which was staged inside the magnificent Roman palazzo Colonna; the cast marching over marble and porphyry floors, the gilded Renaissance room illuminated by huge chandeliers. The work, a tribute by Pierpaolo Piccioli to the manual work behind the scenes of the collection, was created in 3 months thanks to a collaboration between the designer and the British writer / musician Robert Del Naja. The contribution is divided into three parts. Code Temporal starts from Valentino's atelier with a focus on the skill of seamstresses at work in white coats like doctors. Between needles, thimbles and threads, on the notes of a harp that accompanies the gracefulness of the work, the noise of the needle that goes up and down the sewing machine breaks, recalling a mechanical and futurist music. Meanwhile, written on the screen like in silent cinema films. Among various reflections, artists, musicians and poets are mentioned: from Dante to Vivaldi, passing through Modigliani.

In the second part, the garments built and mounted on mannequins pass through the filter of artificial intelligence of Mario Klingemann, a German neural artist. It is important to remember that the AI that we hear so much about allows new systems to relate to what they perceive through sensors such as a video camera. In Klingemann's works, the clothes and work in Valentino's atelier become liquid surfaces in the making like melting gold. 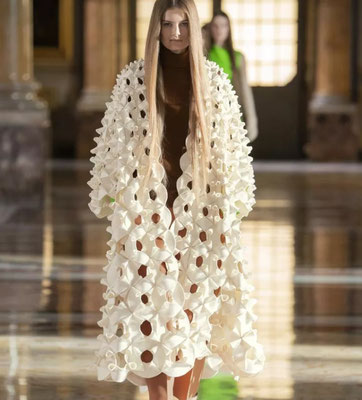 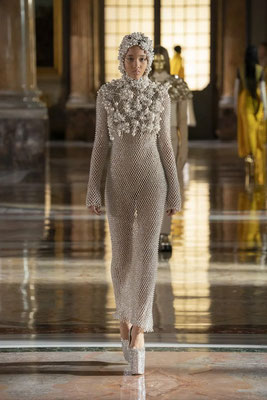 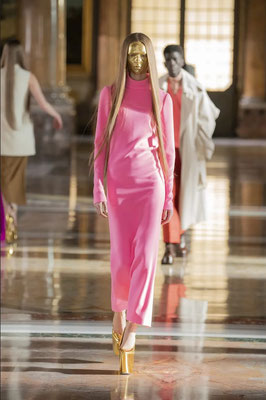 The third act resumes from the royal show at Palazzo Colonna with the release of the top Maria Carla Boscono wrapped in the sublime cape with 500 squares of cashmere and the puzzle dress of semi-crumpled cd. The experiment "makes news" because it introduces avant-garde artificial intelligence into high fashion that enhances the past. The master Valentino comments: “Through the synthetic filter of artificial intelligence, the emotional aspect of Couture emerges, with the celebration and enhancement of human quality: a code that is constantly regenerating itself while remaining timeless.”