Italy is the country par excellence of good food, good food. This prerogative of ours, which positively distinguishes us from the rest of the world, has been immortalized in cinema, theater and advertising, by stars and stars of the big screen. The fact that, in the 1960s, the Americans renamed the Italian films that, from Sergio Leone onwards, reinterpreted the myth of the Bel Paese with a European gaze, speaks volumes about how, in the imagination planetary collective, food is considered one of the most immediately recognizable symbols of Italianness. And, throughout its history, Italian cinema has made recourse on countless occasions to the culinary "made in Italy" to enrich and outline characters and situations quickly and effectively. Let's now try to select ten Italian films about food, or at least that have at least one memorable scene based on the Italian pleasure of good food.

Misery and nobility (1954), by Mario Mattoli

The first image that comes to mind when it comes to food is that of Totò standing on the table, engaged in an almost bacchanal dance in "Miseria e nobiltà" (1954), ready to satisfy an atavistic hunger by grabbing spaghetti for more I can, in my mouth, in the pockets of my overcoat, anywhere, seized by an insatiable appetite. The scene is an amazing hymn to pasta with Totò and company dancing on the table eating spaghetti and stuffing them in their pockets, so that nobody takes them away: brilliant! A testimony of the great comic verve of this scene, created on the spot by the immortal Totò, is given by the actress Valeria Moriconi, who in the film has several scenes together with Prince De Curtis: "While he was shooting, I saw with the tail of the eye the sound engineer who covered his mouth. Then I turn around even better, I see cyanotic people because they couldn't laugh, I look up and see that Totò got up, climbed onto the table and invented to put spaghetti in his pockets. Who knows how long the scene would have gone on, and instead the director Mario Mattoli was forced to stop because while he was putting these spaghetti inside his pockets, Totò had also taken a zampirone put into the pasta to make smoke, and this zampirone was burning him the pocket. We shot a single take, the one included in the film ”.

The Passaguai family (1952), by Aldo Fabrizi

The star of this crazy film, which immediately ranks among the greatest comic hits of the 1950s, is the eater par excellence of Italian cinema, namely Aldo Fabrizi. In the unleashed film, directed, produced and performed by him, he is the head of the family who prepares everything you need at home for a trip to Ostia on August 15th, nothing is missing: he fries the cutlets, prepares spaghetti, and inevitable , takes care of a nice cold watermelon at the right point. The film remains an amazing cross-section of the Italian petty bourgeoisie of the 1950s, which is struggling to confront the first signs of economic well-being. 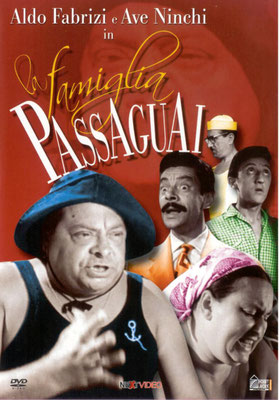 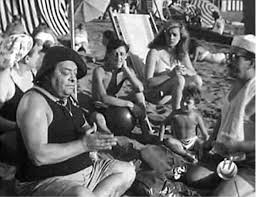 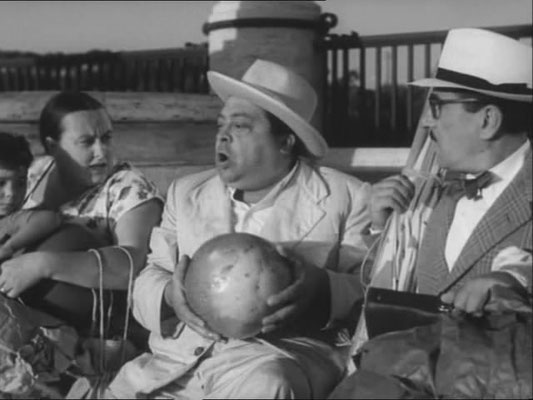 In Monicelli's masterpiece, the gang of failed robbers console themselves with the pasta and chickpeas found in the kitchen they had to break into: all is not lost, at least the belly is full. In fact, who does not remember the famous scene of the film, when the most jinxed and likeable thieves of Italian cinema, digging by digging, instead of reaching the treasure of the Monte di Pietà, emerge in any kitchen where, instead of the treasure, the pasta and chickpeas and the rolls with sauce are found. It was 1958 and, while those were the dishes of every day for many families, hunger remained common in an Italy still struggling with survival, but on a way of imminent economic recovery. A curiosity: the script included pasta and beans, it was Marcello Mastroianni, one of the 'thieves', who asked for it to be replaced with pasta and chickpeas, who, on the set, then ate in complete naturalness, together with Vittorio Gassman, at Tiberio Murgia and in Capannelle.

Here we are at what is not only one of the greatest films in the history of cinema, but also one of those entirely based on food. "The great binge" refers right from the title to a feast of food, combined with sex and the sense of death: a real binge of vices that made the world cry out in scandal. It is the story of four bored friends who decide to commit suicide with an overdose of food and sex. In Ferreri's masterpiece, the four protagonists are Marcello Mastroianni, Ugo Tognazzi, Philippe Noiret and Michél Piccoli. Four great actors, but also four notable eaters, Tognazzi was always famous for his recipes and his passion for cooking, Mastroianni is remembered by all his friends as a good eater of simple and genuine foods, the musician Armando Trovajoli argued that “He would have sold the birthright for a plate of pasta and beans”. "The most fantastic and out of the ordinary cinematic experience ever. A film where food entered the interpretations of us actors, just as our interpretations were closely linked to food, if not determined by it ”, said Ugo Tognazzi about the film. On the set there was really a lot of food, between a plate of pasta and other delicacies cooked by Fauchon, the Parisian king of gastronomy. 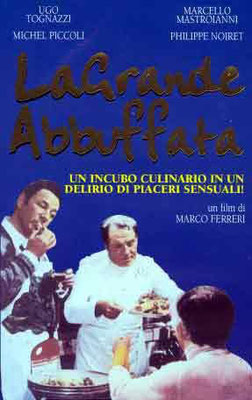 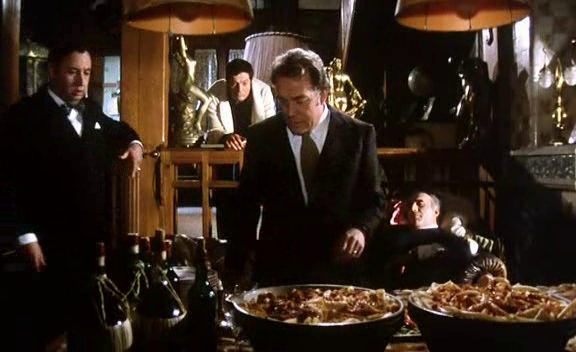 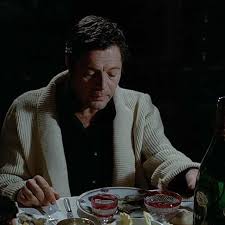 An amazing bittersweet fresco of Italian history from the Second World War to the 1970s, the film has an underlying bitterness and an evocative force that is still very effective today. Good food is not the main element of the film, but it is present in the memorable sequence of the film, the one that remains in the collective memory. In Scola's film, spaghetti is a consoler, but it is also the engine to rebuild an old friendship: the scene in which Gassman, Manfredi and Satta Flores toast to their newfound friendship over a nice plate of spaghetti and a good glass of wine from the "King of the half portion".

In the amazing segment of "Where are you going on vacation?", which is actually almost a feature film, given its length of almost an hour, the theme of food is present, combined with art, in almost the entire film. We cannot forget the exploits of Alberto Sordi and his "film wife" Anna Longhi, put on a diet by their healthy and orientalizing children, who at a certain point let off steam with the worst of the grueling and high-calorie cuisine, binging themselves beyond belief. Their return home, from the infamous "smart holidays" sees them welcomed by their progressive children, who for once adapt to traditions and prepare a truckload of spaghetti with sauce for their parents. 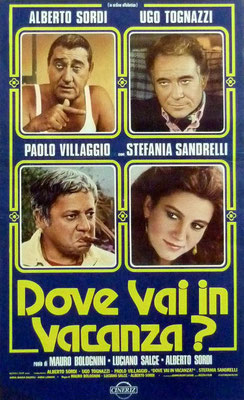 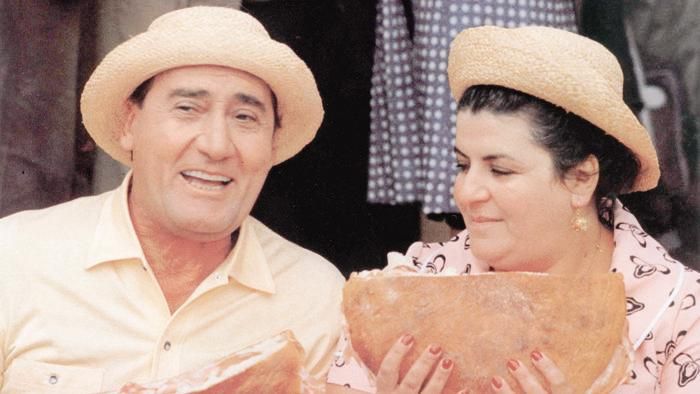 Spaghetti at midnight (1979), by Sergio Martino

Even the sexy comedy of the '70s-' 80s has an excellent representative about food, and it is Sergio Martino's film "Spaghetti a midnight", starring Lino Banfi and Barbara Bouchet, complete with a final binge with Flemings full of macaroni, bucatini and penne all'arrabbiata. The film also features a delicious satire on diets, imposed by "wife" Bouchet on "husband" Banfi, obviously disregarded by the latter.

Big Night is a 1996 American comedy-drama film co-directed by Campbell Scott and Stanley Tucci. The film stars Tucci, alongside Minnie Driver, Ian Holm, Isabella Rossellini and Tony Shalhoub. In the 90s classic,  the only thing standing between two Italian brothers and bankruptcy is their timballo. 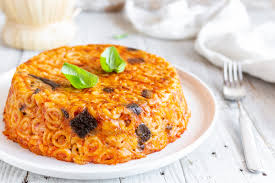 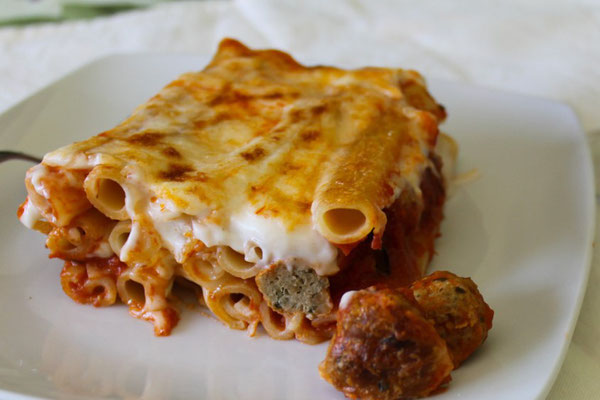 Mince the pancetta and onion separately, then brown for 5 minutes in a saucepan with 3 tbsp oil, 1 rosemary sprig, and a few thyme leaves.

Add the 2 pieces of whole meat and brown on both sides over a high flame for 5-6 minutes. Add 1/2 cup red wine, let simmer for a few minutes, then add the tomato purée and 2 tbsp tomato paste and cover. Cook for 2 hours and 30 minutes. Then remove the lid and continue cooking for 1 hour and 30 minutes. Let cool. Setting aside the tomato sauce, remove the meat, cut it into pieces and grind together with 1 egg and 1 tbsp minced parsley, adding salt and pepper to taste. Shape into walnut-sized balls and pour enough peanut oil into a pan to cover while frying.

Roll them in the flour and fry for 1 minute. Drain on paper towels. Boil the maccheroni, draining it 3-4 minutes prior to the time indicated on the package, then cover with the tomato sauce.

Combine the butter, flour, sugar, and a pinch of salt into a sandy mixture. Mix it with 2 egg yolks and 2 tbsp water. Shape it into a smooth ball, cover, and let rest for 1 hour.

Preheat the oven to 350°F. Cut the hard-boiled eggs into wedges. Roll the dough out until paper-thin and use it to line a greased 8” hinged mold. In the mold, layer maccheroni, hard-boiled eggs, meatballs, and provola, and top with another layer of maccheroni. Fold over the edges of the dough and gently press down to even its surface. Bake for around 1 hour.Let the timbale cool slightly in its mold, then turn upside-down onto a platter and serve. Grazie alla Cucina Italiana.

An Italian-German co-production, the film tells the story of the solitary habits of a depressed cook (Martina Gedeck), who rediscovers the joy of living, after a serious death, thanks to the exuberant Italian chef Mario (Sergio Castellitto). Beyond a simple, linear, romantic plot with dramatic hues, the true protagonist of the film, as can also be seen from the title, is the relationship between food and love. Food as a metaphor for the characters' feelings: the elaborate and technically perfect food of the protagonist, but tasteless because it is cold and not engaging, stubbornly rejected by the niece, who seeks love and affection, things that she finds in the food offered her by the Italian cook, a simple but hot and tasty food. Food as seduction and a real expression of love for what it is packaged for and for which it is offered. Food with its smells, flavors and colors involves all our senses and therefore it is inevitable that it inspires our sexuality: this is the case for the female protagonist conquered by the apparent coarseness and simplicity of the Italian cook's foods.

"There is no doubt that the aromas, flavors, tastings on each other's plate are all movements of seduction, in fact the first thing you ask a woman is to go to dinner together" (Sergio Castellitto on the film ).

The film tells the delightful story of a son struggling with his mother, a slightly characterless noblewoman, to which are added the mother of the administrator and that of the doctor. The poor man then finds himself having to organize a mid-August lunch for the nice old ladies, trying to navigate through squabbles, manias, diets and so on. The menu: baked pasta that one of these devours despite the prohibitions of the doctor son, and fish caught in the Tiber. And then food becomes the means to unite several generations and to bridge distances. 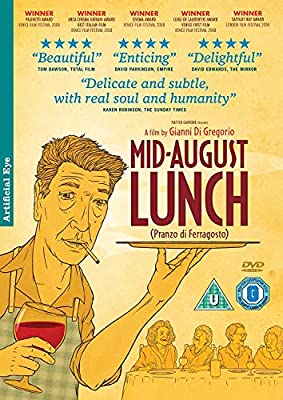 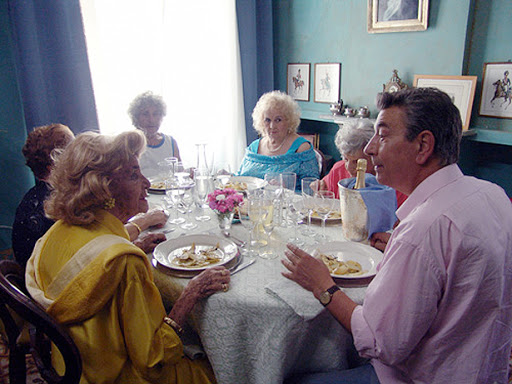 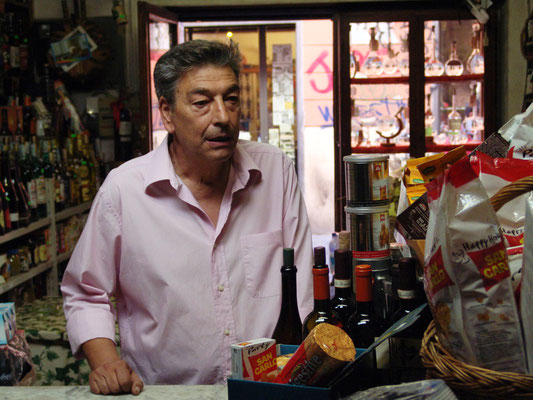