Mulina Bianco an Italian Breakfast tradition for over 40 years

Mulino Bianco turns 45 and in addition to being a brand that has become iconic, it really exists. The brand shows the model of the typical "Mulino Bianco family" that lives happily in the dimension of myth and nostalgia for childhood immediately comes to mind. The history of the Mulino Bianco, however, was not all roses and flowers. Julia Schwoerer, vice president of marketing for Mulino Bianco (and Pan di Stelle) tells us: «The brand was born in 1975, in a very difficult period, marked by terrorism and the so-called austerity, the consequence of the global oil crisis. Immediately the Mulino Bianco became a symbol of optimism and escape from chaos and frenzy, indicating the return to simple and genuine life, of "when the mills were white", in fact ». Il Mulino, designed by Giò Rossi with the collaboration of Cesare Trolli, appears for the first time in the commercial directed by Tornatore and set to music by Morricone in the 1990s. It is in Tuscany, in the province of Siena, in the small village of Chiusdino, where it is still today where fans are able to visit it.

In the seventies, the new brand revolutionized breakfast habits in Italy. To cope with the difficult financial and social scenario, Barilla chose to focus on product diversification and identified bakery products as a strategic market. The first packs of cookies for the Mulino Bianco (literally “White Mill”) brand (Galletti, Tarallucci, Mugnai, Campagnole and Pale) appeared in shops in October 1975 and were an instant success. The new brand name and logo – picked to underline the attention paid to the quality of the ingredients – respond to a new trend towards recovering values linked to nature and tradition which began to establish itself in those years. . The brand’s success is destined to grow dramatically, together with the range of products available. Today Mulino Bianco includes cookies pastry, minicakes, cakes, soft and dry breads.

Mulino Bianco’s advertising has always tried to stay abreast of narrative codes and symbolic values, to tie in with Italy’s socio-cultural climate. In 1978 the much-celebrated Coccio, a bowl for milk featuring the Mulino drawing, launched a hugely popular history of collecting and merchandising. In 1983, Sorpresine (literally “Little Surprises”) appeared inside snack packs, gifts born out of a partnership with Graziella Carbone, a specialist in sales promotion: small playing cards, erasers in the shape of Mulino Bianco’s products, items for school, miniature board games, stickers, etc. destined to become icons of the ’80s and ‘90s.

In 2012, Mulino opened its doors to the public for the first time with a new cinemainspired TV campaign focusing on the spirit of the brand: sincere, close to people, committedto creating“a goodworld”through the goodness and qualityof its products and its care for the environment. In the centre of everything, the brand “know-how” is embodied in a new figure: the Miller, interpreted by the multi-faceted Spanish actor Antonio Banderas. 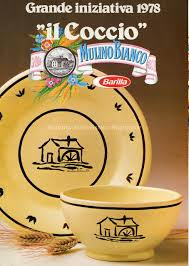 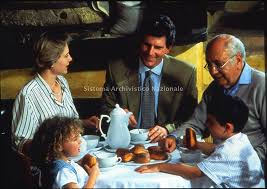 In 2010, thirty five years after they first appeared, Mulino Bianco celebrated its Sorpresine by offering them in a digital version. In 1990 another important step was taken: the realization of the Mulino itself, in the hills of Siena, which will become the set for a new campaign dedicated to the Mulino Family directed by Giuseppe Tornatore with music by Ennio Morricone.

Cut the pears into cubes and caramelize them together with half the sugar, then cool.Now use narrow glasses and crumble a few mills on the bottom .Whip the cream with robiola and sugar and put everything in a piping bag.

Alternate layers of caramelized pear cubes cream, then last the plate with the chocolate chips. Enjoy your meal!