Do you know about the origins of the famous Pasta Alfredo?

Alfredo Fettuccine are one of the most popular pasta dishes in the world: here is the basic recipe, easy and quick to try.

In fact, only three ingredients are necessary to make this recipe really simple pasta dish but with a unique taste: fresh Fettuccine, grated Parmigiano Reggiano and cooking water. A knob of butter and a sprinkling of pepper will complete the dish. Be wary of recipes that include cream or garlic, because they are not part of the original recipe!

How Pasta Alfredo got to the US

In 1914, one particular upset stomach originated what we now knows as Fettuccine Alfredo. Alfredo di Lelio ran a restaurant on the Via della Scrofa in Rome.

His wife Ines was pregnant with their second child, and the pregnancy caused her terrible nausea. Unable to keep much down, Alfredo made Ines a dish of plain pasta, pasta in bianco, or white pasta. He tossed the fresh-made pasta with butter and Parmesan. Ines ate this dish regularly, with whatever happened to be the fatte in casa ("made in house") pasta. Alfredo added it to the restaurant's menu.

While on their honeymoon in 1920, Douglas Fairbanks and Mary Pickford, two famous American actors of the silent movies, were in the restaurant and tasted the simple pasta -- that day, fettuccine. They asked for the recipe, and brought it home to the U.S. 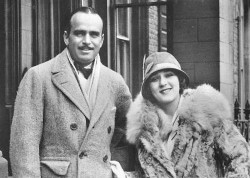 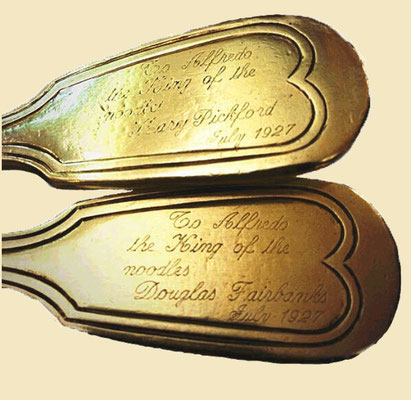 Put the water to boil and, in the meantime, prepare the fettuccine or use fresh Fettuccine from your local pastry shop. Grate 200 g of Parmigiano Reggiano generously and set aside in a large bowl.

As soon as the water boils, add salt and toss the fettuccine into the water. They will cook in about 4 minutes; put a large pan on the fire and melt a knob of butter. When the pasta has started to release the starch into the water, take a ladle and add it to the pan with the butter, then keep another couple aside in a jug. Drain the fettuccine and pour them into the pan with the butter, season them well and then slowly add the Parmesan, stirring and adding more cooking water. When you get a nice cream, sprinkle with black pepper and serve immediately!

The most complex point is the actual stirring and mixing of the Parmesan with the pasta to produce the original creamy consistency. This is actually done in front of the customer with the help of a long fork and spoon,with a rotary movement from the bottom upwards, gently, until the Fettuccine become one with the butter and the Parmesan. 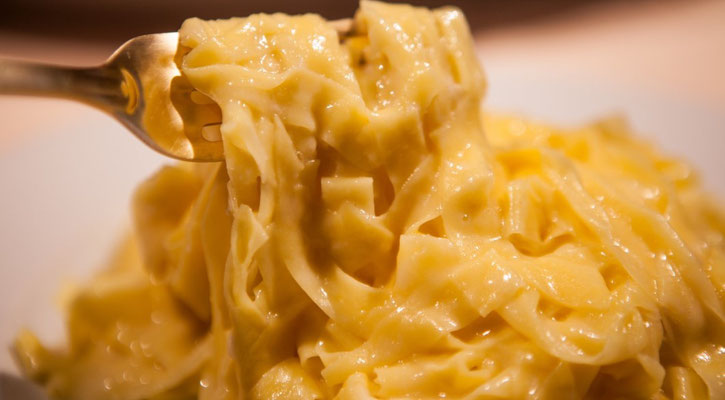 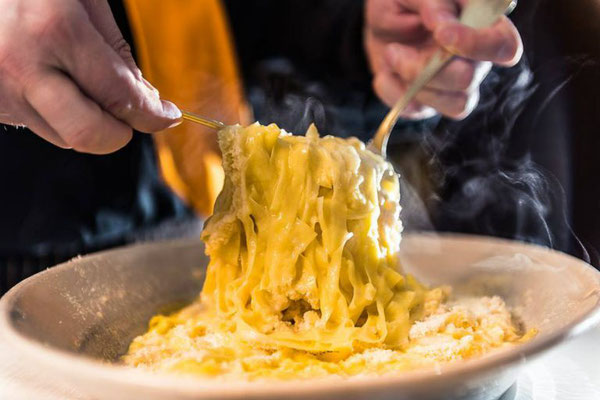 Two Restaurants competing for the invention of Fettucine Alfredo

In 1950, Alfredo Di Lelio (Alfredo I) decided to hand the reins and opening with his son Armando a new restaurant in Rome, “Il Vero Alfredo” in Piazza Augusto Imperatore 30. , where currently the family tradition continues with the management by his son Armando until 1982 and now by his son Alfredo (Alfredo III) with his sister Ines Di Lelio.

From father to son, from son to grandson, in that way Alfredo became a true dynasty. Here you find photos of the famous people who ate the famous Fettuccine Alfredo

However, until today, the two restaurants - the Vero Alfredo and Alfredo alla Scofra are competing for the authorship of the invention of Fettuccine Alfredo. Currently managing "Alfredo alla Scrofa" are Veronica Salvatori and Mario Mozzetti, heirs of the restaurant sold by Alfredo to their great-grandparents. The restaurant has remained the same and inside there are photos of all the stars who also ate there.

There are many famous people who have eaten the legendary Fettuccine Alfredo at Ristorante Alfredo - Italian Actors, such as Anna Magnani, Sofia Loren or Gina Lollobrigida and American Actors, like Clark Cable, Frank Sinatra, Robert Taylor and Barbara Stanwych. Especially during the heydays of Dolce Vita and the nightlife on Via Veneto in Rome. 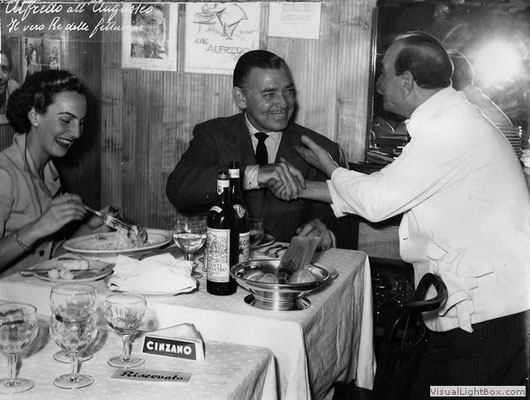 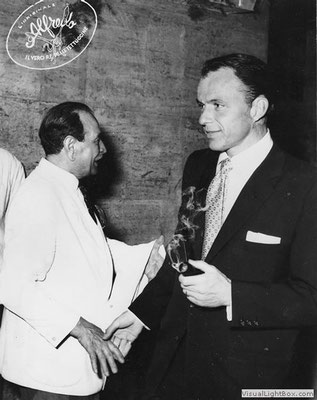 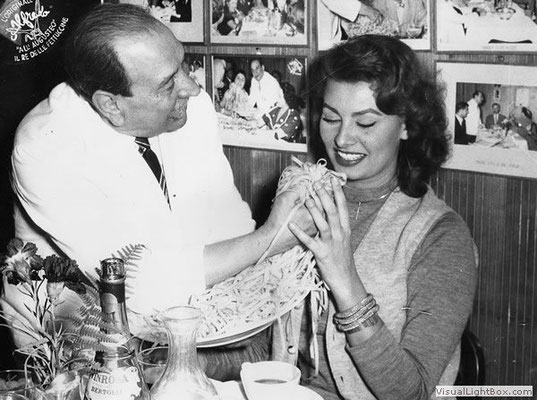 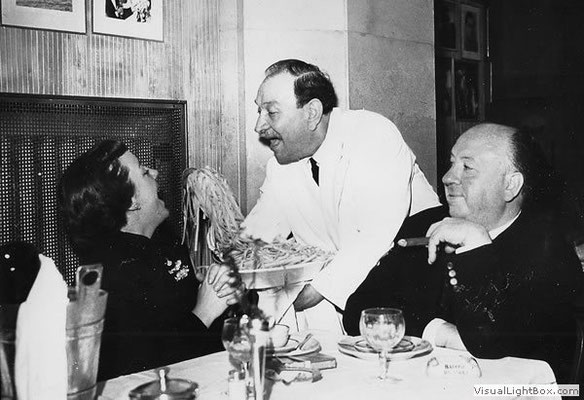 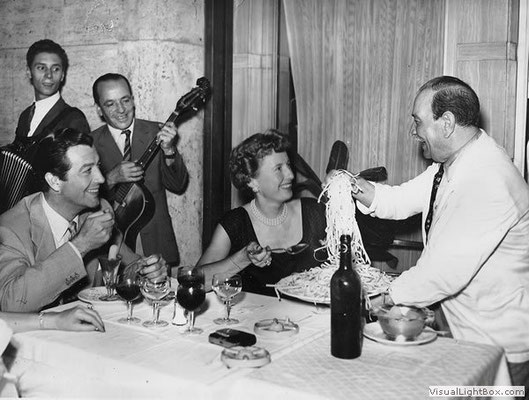 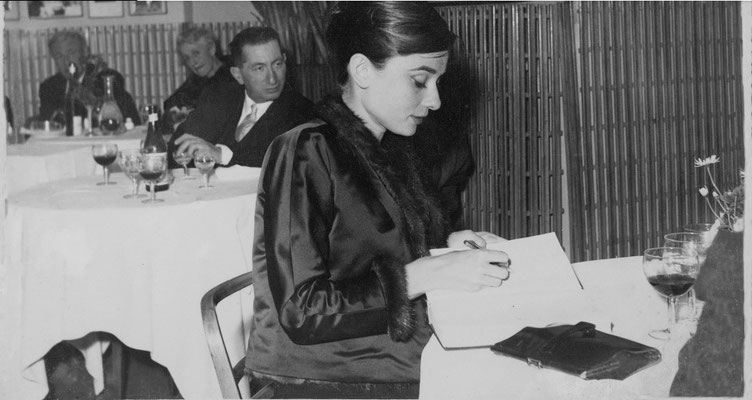 In 1950, Alfredo Di Lelio (Alfredo I) decided to hand the reins and opening with his son Armando a new restaurant in Rome, “Il Vero Alfredo” in Piazza Augusto Imperatore 30, where currently continues the family tradition managed by his son Armando until 1982 and now by his son Alfredo (Alfredo III) with his sister Ines Di Lelio (pictured here with Mario Girotti or Terence Hill).

From father to son, from son to grandson, in that way Alfredo became a true dynasty.

Alfredo III, in fact, inheriting the inspiration of his grandfather and father, has the merit to have continued worthily the path traced by his predecessors, taking the name of this historic restaurant in the world.